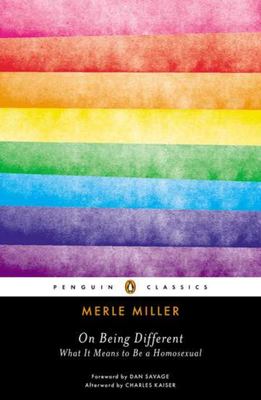 On Being Different: What It Means to Be a Homosexual

Originally published in 1971, Merle Miller's On Being Differentis a pioneering and thought-provoking book about being homosexual in the United States. Just two years after the Stonewall riots, Miller wrote a poignant essay for the New York Times Magazineentitled "What It Means To Be a Homosexual" in response to a homophobic article published in Harper's Magazine. Described as "the most widely read and discussed essay of the decade," the article was developed into the remarkable short book On Being Different - one of the earliest memoirs to affirm the importance of coming out.Merle Miller (1919-1986) was an editor at Harper's Magazine, Timeand The Nationand was the bestselling author of several books, including the novel A Gay and Melancholy Sound and Plain Speaking, a biography of Harry S Truman.Dan Savage is the internationally syndicated columnist of 'Savage Love' and the author of several books.Charles Kaiser is an author, journalist and blogger. His books include 1968 in America and The Gay Metropolis.

"Without indulging in sensationalism or special pleading but making it clear that he was writing directly from his own experience, [Miller] bridged the gap between the 'straights' and the 'gays' in a way that few recent writers on the subject have done. He also put himself on the line as a well-known writer, who was not afraid to publicly acknowledge his homosexuality."--"Publishers Weekly"