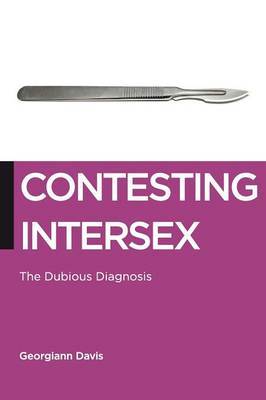 When sociologist Georgiann Davis was a teenager, her doctors discovered that she possessed XY chromosomes, marking her as intersex. Rather than share this information with her, they withheld the diagnosis in order to “protect” the development of her gender identity; it was years before Davis would see her own medical records as an adult and learn the truth. Davis’ experience is not unusual. Many intersex people feel isolated from one another and violated by medical practices that support conventional notions of the male/female sex binary which have historically led to secrecy and shame about being intersex. Yet, the rise of intersex activism and visibility in the US has called into question the practice of classifying intersex as an abnormality, rather than as a mere biological variation. This shift in thinking has the potential to transform entrenched intersex medical treatment.In Contesting Intersex, Davis draws on interviews with intersex people, their parents, and medical experts to explore the oft-questioned views on intersex in medical and activist communities, as well as the evolution of thought in regards to intersex visibility and transparency. She finds that framing intersex as an abnormality is harmful and can alter the course of one’s life. In fact, controversy over this framing continues, as intersex has been renamed a ‘disorder of sex development’ throughout medicine. This happened, she suggests, as a means for doctors to reassert their authority over the intersex body in the face of increasing intersex activism in the 1990s and feminist critiques of intersex medical treatment. Davis argues the renaming of ‘intersex’ as a ‘disorder of sex development’ is strong evidence that the intersex diagnosis is dubious. Within the intersex community, though, disorder of sex development terminology is hotly disputed; some prefer not to use a term which pathologizes their bodies, while others prefer to think of intersex in scientific terms. Although terminology is currently a source of tension within the movement, Davis hopes intersex activists and their allies can come together to improve the lives of intersex people, their families, and future generations. However, for this to happen, the intersex diagnosis, as well as sex, gender, and sexuality, needs to be understood as socially constructed phenomena.  A personal journey into medical and social activism, Contesting Intersex presents a unique perspective on how medical diagnoses can affect lives profoundly.

Davis presents a compelling and beautifully-crafted text about the complex issues of gender and sexual identity. How medicine and diagnosis can either come in aid of, or brutally disrupt the experience of intersexuality is an important paradox, worthy of reflection and debate. With this book, Davis gets the ball rolling and demands our attention. It is well-worth the read. -Annemarie Jutel, author of Putting a Name to It: Diagnosis in Contemporary Society"

Georgiann Davis is Assistant Professor of Sociology at the University of Nevada, Las Vegas. She is the current President of the AIS-DSD Support Group (www.aisdsd.org) for individuals with differences of sex development.