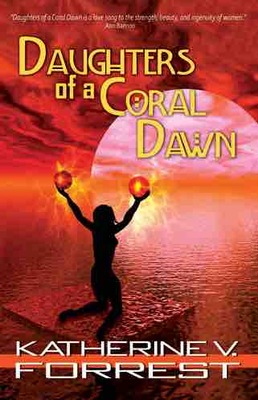 The sky begins to shimmer with the silver of brilliant star clusters, the eerie radiance of red and blue fluorescence. One huge moon, glowing gold, is soon joined by two others, much smaller, which slowly rise above the horizon, each jagged in shape as if carelessly formed. Night falls suddenly and completely, and we sit together in a glorious royal-blue world illuminated with silver. It is Mother who speaks, softly: ‘So lovely a world. . . is surely meant for women.’

Late in the 22nd century, the settling of a new world falls on the strong shoulders of young Megan. The perfect leader, she undertakes to guide her sisters to a new planet, free from the shackles of the brutal Earth regime. Negotiating politics in a society of women is second only to securing their safety. When a landing party of men and women discover their colony Megan must decide if the outsiders will live or die. And that includes Lt. Laurel Meredith, whose disturbing beauty is as dangerous to Megan as her people are to Megan's world.

Originally published in 1984 by Naiad Press. Katherine Forrest's bestselling "Daughters of a Coral Dawn "first appeared in 1984 and became an instant classic. Through seven printings, including the 10th anniversary edition published in 1994, this story of women creating their own world after escaping an oppressive society has continued to gain fans and influence writers for 18 years.

""Daughters of a Coral Dawn" is a love song to the strength, beauty, and ingenuity of women."--Ann Bannon, author of "Beebo Brinker"