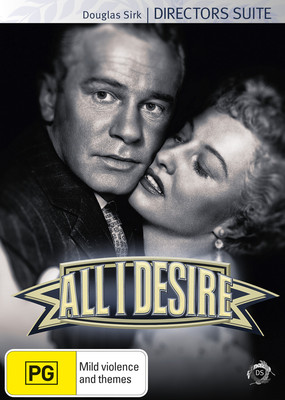 All I Desire Dvd

Douglas Sirk, the undisputed master of Hollywood melodrama, once again shares his views on the oppressive righteousness of American society in ALL I DESIRE.

When the adulterous Naomi Murdoch (Barbara Stanwyck in a knock-out performance) returns to the family she abandoned years before, her arrival is rendered all the more difficult by the appearance of her former lover, Dutch, anxious to rekindle the flames of their previous affair. As she tries to re-acquaint herself with the children she left for a life on the stage, Naomi must endure the bitterness of her eldest daughter, the misplaced admiration of her younger daughter and the reluctance of her husband to embrace her return. Set in the early 20th century, Naomi's flamboyant style and perceived louche moralilty set a cat among the pigeons for the gossipy Riverdale townspeople.

ALL I DESIRE resounds with the Sirkian themes of the imprisoning nature of small-town America, and the conservative quashing of individuality by its inhabitants